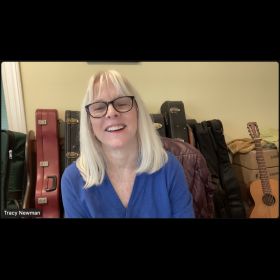 Tracy Newman is a founding member of The Groundlings Improv Theatre, which is one of the main farm companies for SNL. She was a TV writer/producer for 16 years, starting as a staff writer on Cheers. In 1997, she won an Emmy and Peabody Award for co-writing the groundbreaking “coming out” episode of Ellen. In 2001 she co-created the ABC comedy, According to Jim. Tracy has been playing guitar since ... read more