The collaboration between Luke Vibert and BluRum13 is very real in this second installment of BLUKE available on vinyl and CD
https://bluke.bandcamp.com/ 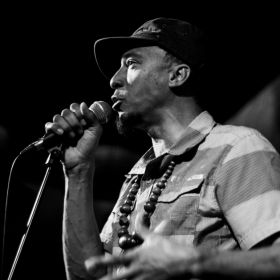 Prodigious and prolifc emcee James Sobers, known professionally as BluRum13, has had an iconic career as a solo and collaboratve hiphop artst. He has released four solo albums, performed well over 1,000 shows in Europe and North America, worked with such luminaries as Luke Vibert, Kid Koala, and DJ Vadim, wri en and per- formed with many groups, including the Russian Percussion, One Self, US3, Rev ... read more