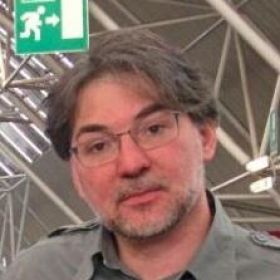 I sincerely thank all of you for having enjoyed my song: Artigiani di Speranza.
This fraternal welcome of yours truly amazes me.
I thought to tell you how it was born. During Lent 2005, February 25, some friends of mine had organized a ten-station biblical viae crucis based on the Passion according to Matthew. I was assigned the tenth stage: "The empty tomb" (Matthew 28, 1-8). Each of us had the task of choosing a relevant reading from a favorite spiritual author. But I didn't understand this aspect so I opened the Bible and after a while I wrote my meditation. After a few days I began to believe that it was a suitable text for a song on hope and the Resurrection and with some modifications it could work.
In the meantime, I had a sequence of two chords that I liked: G# C, which I was unable to follow up on. Then towards the end of the year, a friend of mine wrote a text to the Holy Spirit and handed it to me and to a teacher of Gregorian chant who composed the music after a few days. Then, I made my arrangements, which had been somewhat expanded, and I thought it was time to put my meditation to music on the empty tomb.
After a few days, the refrain was missing, which came whistling suddenly. Later I thought of a prayer I wrote on January 22, 2006: "Dear Jesus makes us artisans of hope, turners of faith, wanderers of charity" and so artisans of hope entered the second part of the refrain.
After a year, that meditation had become a song.
Craftsmen of hope: it appeared to me from a very involving aspect. I imagined this: the empty tomb is like the shop where each of us, like a craftsman, goes there every day to produce his personal conversion work. And from there to go towards the goals of the neighbor, to bring a job that has now become an announcement: the mission of evangelical hope.
Anyone who loves to change things positively is a craftsman of hope.
I greet you with deep gratitude.
Enzo Cianci